Stumbling Upon a Hindu Festival in Kanyakumari

Sometimes it can be hard breaking off the tourist trail to discover genuine cultural and traditional aspects of a place. India is a country where this sort of thing is far more likely – every corner you turn there is a chance that you’ll come across something interesting, unusual, bemusing, incredible. An experience that I had at the most Southern tip of mainland India, in the town of Kanyakumari, typifies this sentiment.

After arriving late the night before, it was our first day exploring the town that we’d just arrived in, Kanyakumari (in Tamil Nadu). We set off without a real plan and without knowing exactly where we were going. After following some narrow alleyways between the multi-coloured houses and unit blocks (which give character to the town) we came across a large, man made pond, perhaps previously used as a bath, and were greeted with the sound of loud drumming. A canopy was set up in one of the corners of the pool area where there was a large gathering of locals. It was clearly a Hindu festival of some sort and, after taking off our shoes, we were welcomed into the area by the friendly local Tamils. 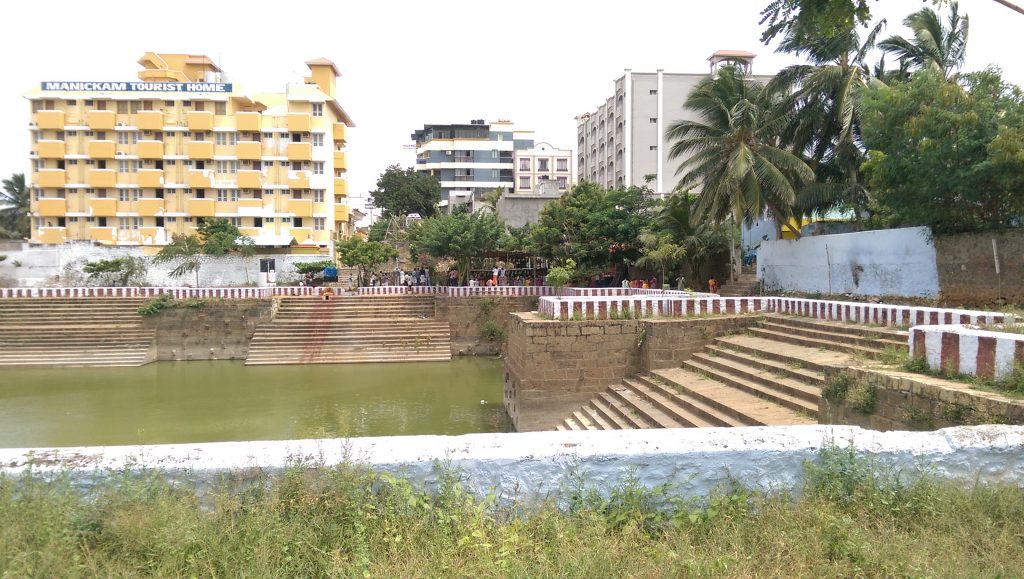 The area, overlooked by a picturesque “Tourist Home” (end sarcasm)

A number of drummers played feverishly (and got even more excited as we started taking photos of them) as two men danced around a large, cauldron like vessel. They were both holding branches covered in yellow flowers and would frequently dip these into the cauldron and then splash them back over themselves while shaking their heads and wagging their tongues in a possessed sort of manner. Other onlookers chanted around them. 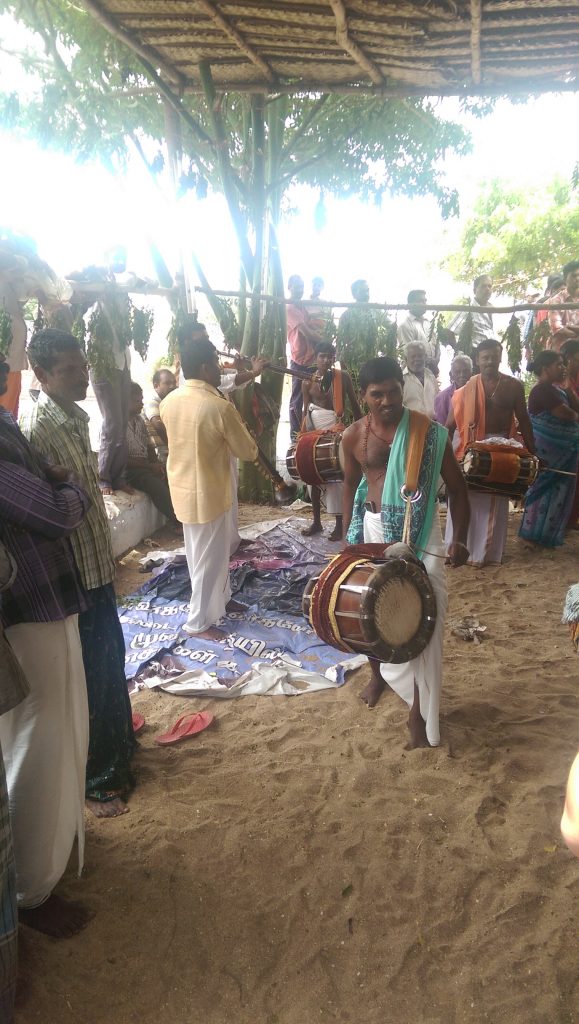 Myself and Nathan, a backpacker whom I was travelling with at the time, constantly exchanged glances that said “Wow, what on Earth have we stumbled upon here!!!”.

After that stage of the ritual died down, we spoke to one of the locals. Through his broken English he encouraged us to come back later that night, at around 10pm, for the climax of the celebration. 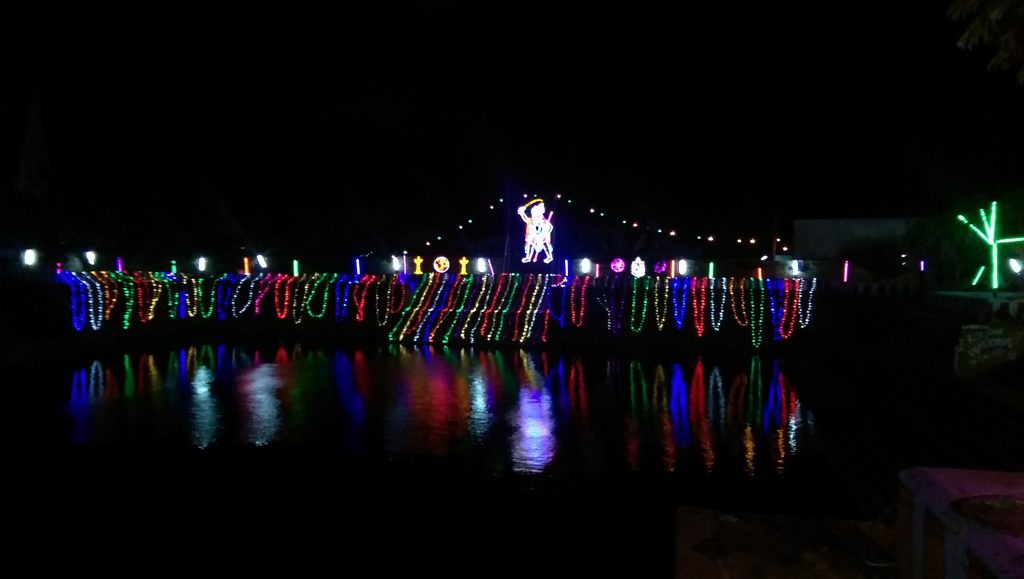 Pool area lit up at night

We did return and things had certainly progressed since we had left during the day. A large figure had appeared, I’m guessing it was a God, and it was probably made of plaster. Extravagantly decorated, he dominated the area while another bunch of figures stood to the side, hidden by a curtain. The people were building up piles and piles of fruit in front of the figures, to the sounds of the drums which were now accompanied by those Indian trumpet things. As the event reached a crescendo all the people started filing into the area. The crazy men returned with their yellow branches and became even more frenzied and revved up than before. Finally, the statues of three more Gods were revealed. The people worshipped them and began burning incense around them. I’m sure the Gods would have been pleased with their bounties of fruit. 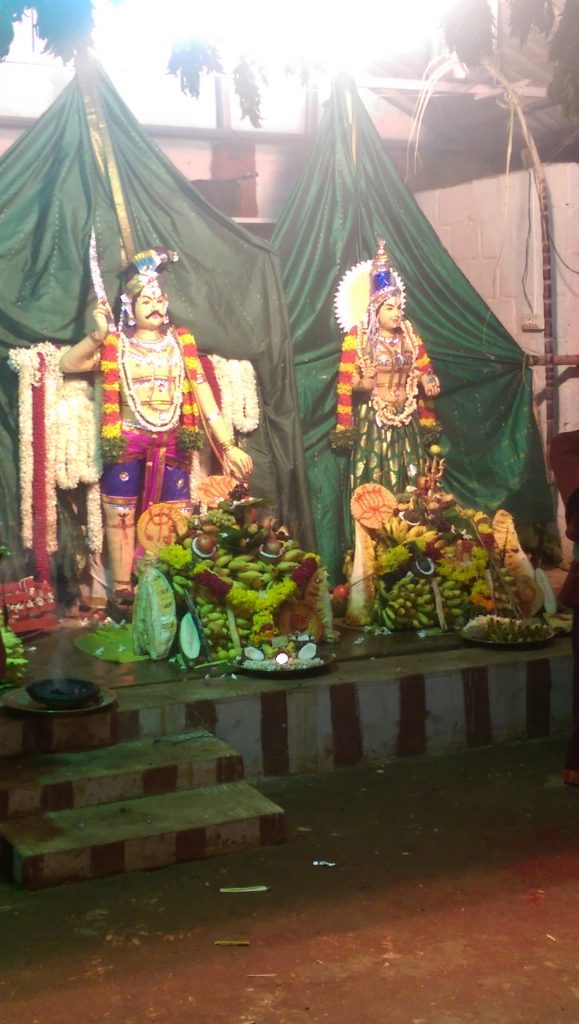 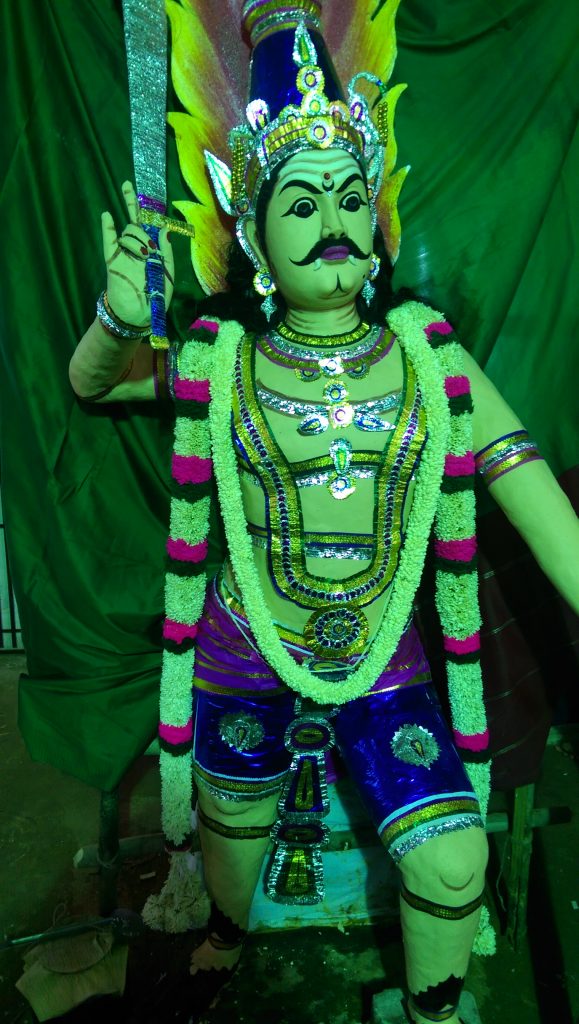 We left it there, knowing that we’d been a part of something really unique, something that you could only come across by chance when travelling. It certainly wasn’t what we expected when setting off to start our day at the very bottom of India.

More on Kanyakumari to come…