Sleeping on Overnight Transport in India

I can’t sleep in economy class on planes. Barring the extra leg room seats at the front of the cabin, those cramped, poor excuses for personal space just do not accommodate my tall frame, especially when it comes to putting my head back and trying to get some shut eye. This led me to become very reluctant to take the option for overnight travel on my trip. I just assumed that, much like on planes, I’d be lying there on a train or bus unconformable and awake all night – especially in India.

Much to my dismay, there were times where my desired destination was only reachable via an overnight trip. Would I have to live through hell on wheels for a night or would my moving accommodation by more comfortable than I thought?

My first go at it, on a bus from Mysore to Kochi, saw my fears realised. I made the mistake of ending up with upright seating for the 10-hour trip. It was like being on a plane with constant, violent turbulence. I was thrown from left to right as the bus made its way along a ridiculously windy road. It would then have to slam on the brakes to safely negotiate a section of road with huge chunks of missing asphalt. Needless to say, I got a maximum of 1 hour of sleep and was pretty damn dazed when I rocked up in Fort Kochi at 4:30am.

Now, for someone who is quite precious about the whole good sleep thing, you’d expect me to stay ahead in my planning and preparation in order to avoid any sort of unwanted situations. But you’d be wrong, and this next trip highlights that. Later on in my travels I found myself back in Kochi, wanting to get to Goa. That’s quite a long way. About 13 hours away in fact. The only information I had was the time the train was due to leave, and that was it, as I rushed into the station and quickly bought my unreserved ticket (I could upgrade on the train, they told me). The train was about an hour and a half late and didn’t end up leaving until about 4:30pm. A 13-hour trip overnight and I didn’t even have a reserved seat. Nice. I stood for a couple of hours until we stopped at a station where a lot of people got off. I took the opportunity to get an available spot in a sleeper carriage. Over the next couple of hours I hopped from one spot to another as people claimed their booked beds. 9 o’clock passed and there had been no sign of an inspector – things were starting to look dicey. Then, like a beacon in the night, he appeared in the aisle way and I swooped on him from my currently occupied top level bunk. 880 rupees later and I was in comfortable, cool 3AC. The beds aren’t exactly the biggest and I had to cuddle my small backpack (which contained my valuables), but I was able to manoeuvre myself into comfortable enough position. And, to my surprise, aided by the provided pillow and blanket, I slept. Right through to 4am when it was time to alight. 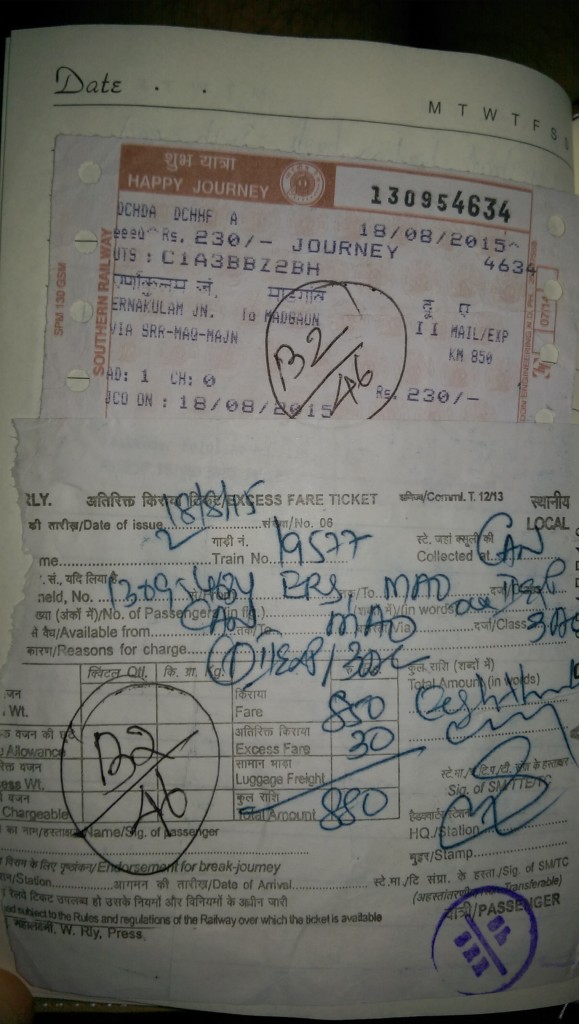 It worked on a bus too. This time it was a proper sleeper bus. My travel agent in Goa did a good job in getting me a double all to myself. Once again, I slept on an overnight trip and arrived in Hampi in a decent condition. My smaller single bed on the bus from Hampi to Mumbai was less comfortable, but I still got some sleep (despite, for the first time on the trip, suffering from rather uncomfortable issues in my bowels).

The key point of difference is that I just need to be horizontal. There was nothing wrong with the overnight modes on transport in India. It’s easy and still relatively cheap to catch comfortable overnight services. I’d been worried about something that I turned out to be fine with all along.

The trains have toilets and the occasional longer stop, during which you can jump off to grab food (or you can just grab a biryani off a salesman through the train window). And the buses stop quite frequently for comfort and refreshment breaks.

Perhaps just be a bit more organised than I was on the train. It could have been a real long night if the AC classes were fully booked!
(Reserved seats must be booked before the train departs its first station).